Not long after my last day at work, I started planning this set of towels. They're the most complicated project I've woven yet! The pattern was in an old issue of Weaver's Craft magazine (Issue 19, 2006), and it's called "Crocus in Snow". The original pattern was blue instead of pink. I have no idea whether pink croci exist, or whether they'd pop up out of the snow. But I like the pink; it's cheerful. Do petunias like snow? Probably not.

Yesterday afternoon I had a job interview, so while I was waiting for 1 pm to arrive I sat down at the loom, finished the last few pattern repeats, and cut the towel fabric loose from the loom!

I have now finished my unemployment towels, so I suppose that means I am ready to go back to work. 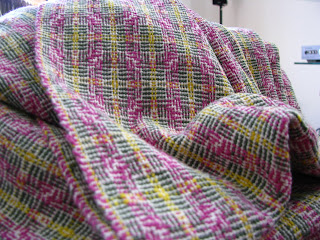