Two years and two days ago, Rob and I both reluctantly (and separately) decided to go to a July 4th singles party sponsored by a couple of local singles groups. There were about 40 people there. I had already bought my ticket but didn't want to go. I told myself that I had to at least go, and I could always leave if it wasn't any fun. Rob went to the party but tells me he was talking to another woman on the phone while he was there. Sigh.

Two years later, here we are! I have a much better haircut now. Rob looks pretty much the same. :-) To celebrate, we went out for a delectable lunch at Il Fornaio in Reston, which had a surprisingly good variety of vegetarian options. We are both very lucky to have found each other. 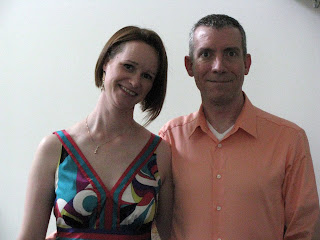